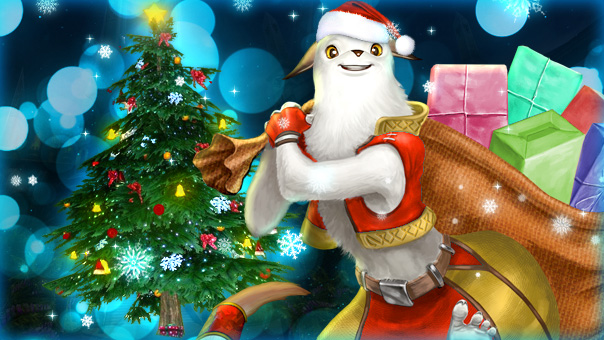 It's snowing in Atreia! Yet these Snowflakes aren't merely frozen water. They're true gifts from the heavens and grant you precious items.

Visit the NPCs by the Solorius tree in the capitals, she'll give you two Snowflakes per day.

Double-click the Snowflake in your inventory. It will either increase by one to three levels, or it will be destroyed. In the case of the latter you'll receive a Opportunity Crystal (see below), as well as additional items such as ancient coins, depending on the level – the higher the level of the Snowflake, the more valuable the rewards.

If your Snowflake reaches the maximum level 10, clicking the Snowflake one last time will transform it into a Snow Crystal and an Aurora Fragment. There is also a chance of receiving a Snow Crystal from level 4 – either when the Snowflake is destroyed, or as a by-product when levelling up.

Combine the Snow Crystal and Aurora Fragment together and you'll receive a Prism – an extraordinary bundle that conceals a particularly valuable item, such as a Dragon Lord's Weapon Box, a Fabled Godstone Bundle or a Large Box of 100% Manastone Socketing Aids and more!

Opportunity Crystal which you receive from destroyed Snowflakes can be brought to Frostirunerk. For every 10 crystals, you'll get a further Snowflake.

Snowflakes are the main items in this event.

They can be obtained by running instances, killing bosses, finishing the daily quests that Frostirunerk offers in your main city or get them in our webshop with a limit of 1 daily per account.

You will get one +1 Snowflake for being online every 30 minutes with a limit of 6 Snowflakes per day. (level 60+)

What can I do with Snowflakes?

Snowflakes can be “enhanced” by simply clicking on them and upgrading a single Snowflake up to +10. Every new Snowflake received starts at +1. However, there is a possibility the Snowflake will break during the enhancement process.

When you break your Snowflake, there is a chance to receive following items and components depending on the enhancement level:

When a snowflake reaches +10, it can no longer be enhanced and will automatically break when using it. Upon opening a Snowflake +10, you will receive a guaranteed Aurora Fragment and a guaranteed Snow Crystal.

These items are components and are available when opening a Snowflake +10 version.