Udas Temple, also known as Upper Udas, was a group instance for players of level 51 and above. Introduced with the Assault on Balaurea expansion (Aion 2.0), this underground shrine is the headquarters of the Dragonbound cult plaguing Inggison and Gelkmaros. There are access points in respectively Undirborg and Subterreana, which can be used by the player regardless of their faction.

This instance was in many ways the 'prequel' to Lower Udas Temple, although completion of the regular Udas was not a prerequisite to enter it. It had many quests associated with it, and although its role was diminished in later patches it remained a very popular instance to duo for EXP.

''The Udas Temple stands as an ancient relic of the Millennium War. Built by fanatics brainwashed by the Dragon Lord Beritra, the architecture is similar in style to that of the ancient Atreian humans. Beritra manipulated these fanatics, bending them to his will until they were little more than his puppets, and then ordered them to build a colossal temple dedicated to his legend. Those brainwashed fanatics worshipped Beritra for centuries, and indoctrinated thousands into their ranks. At one stage the Empyrean Lords grew so concerned with their numbers that Lady Siel sent the Siel's Spear Legion to destroy the great temple. The attack failed, but the ruined parts of the building still to this day show the scars of that terrible battle. A group of Balaur worshippers known as the Dragonbound have recently taken up residence in the abandoned temple. Your task is to find out what these traitors are looking for, and to give aid to the few descendants of the Siel’s Spear Legion, the Reian tribesmen''. 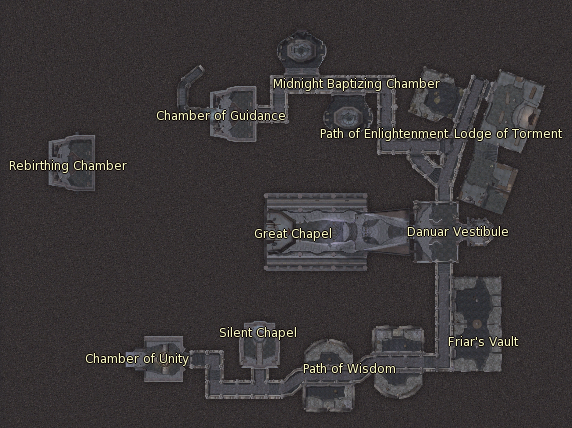 This instance can be run in two ways. Upon entering the path will split in two, and the party can choose which path to take. Each path has its own mini-boss, and slaying either of the two will grant access to the final boss room, the Grand Chapel. The left path (bottom) is longer but has an easier boss, while the right path (top) is shorter but has a harder boss. Most groups prefer to take the right path because it is faster and the boss is relevant for quest purposes. The final boss is mostly skipped due to the meager rewards.

Assuming the group turned right, proceed along to the top of the path and turn right to enter the Lodge of Torment. Carefully plan your path through the numerous cultists towards the back of the adjoined room, where you will find Agra the Guide either at the end or in the small room to the left. In both cases he will be accompanied by two adds, of which the Udas Darkwatcher (Sorcerer/Spiritmaster) must be dispatched first. It will summon an elite spirit once aggroed and has access several hard-hitting spells and CCs, including Curse of Roots and Meteor Shower. Agra the Guide will drop the Chamber of Guidance Key, allowing you to skip straight to the path's mini-boss. Be watchful of mobs in hide that lurk along the pathways and patrols as you make your way. In the Chamber of Guidance the group will come to face with Nexus, the right path's mini-boss. Clear all mobs in the room before engaging him.

Nexus can be a challenging fight, and will require both good healing and dispells from a Spiritmaster. He cannot be kited, so it is recommended to have a plate class tank him near the gate in the back of the room, and have him face away from the rest of the group (which should engage him from max distance). His skillset includes Silver Mirror (reflects all damage received from players within <10 meter; this should be dispelled as soon as possible), Cruel Smash (close-range AoE) and Blade of Lunacy.

Blade of Lunacy is an almost room-wide AoE that inflicts massive damage. Healers will need to keep an eye out on the tank and on themselves, and be fast with healing. Ranged DPS classes, if they stay at max range, can avoid the damage. Around 50% this skill be used more often. At 25% health Nexus will buff himself with Manic Rage, greatly increasing his offensive capabilities. Blade of Lunacy will also be replaced by Raging Wind Blade, a more lethal version that has a shorter range but is nearly instant-cast. At this point the group must burn him down as soon as possible while keeping distance. After subduing him the group may exit the instance through the portal, or loot the  Great Chapel Key and proceed to the central room (if desired).

The left path has two locked doors (Silent Chapel and Chamber of Unity), that are opened through different means. The first stop will be the Friar's Vault, where the group must locate and defeat the first named monster in the back of the room, Cota the Gatekeeper, to acquire the Silent Chapel Key. In order to unlock the Chamber of Unity, the group must proceed along the pathway and locate the three other named monsters. Kiya the Protector and Vida the Protector will be in either the top or the bottom rooms adjoined to the Path of Wisdom. Once they are down, open the Silent Chapel and you will find the fourth and final named monster: Tala the Protector. Monsters will be hiding in this room, so be sure to seek and clear them out first.

With the three protector siblings down the seal on the Chamber of Unity will fade, where the group will find Vallakhan waiting for them. There is no need to clear the entire room. Upon engaging Vallakhan he will summon a durable elite spirit. It is strong but slow, and can thus be kited by one of the group's ranged DPS while still being able to hit the boss. The only skill to watch out for is Collapse, which will instantly kill any nearby targets once finished casting. It is recommended to move out of the room when he is casting this skill. Some groups also prefer to lure Vallakhan to the entrance room (Danuar Vestibule), where they will have more space to move. If this option is chosen however any mob patrols and potentially aggro-able adds should have been cleared out first. Upon defeating the boss the group may loot his corpse for the Great Chapel Key and proceed to the final room (if desired).

Open stepping through the doors the group will find itself in the heart of the temple, a cathedral brimming with Dragonbound and even several Balaur. Clear all mobs on top of the stairs before engaging the final boss and the spiritual leader of the Dragonbound: Devoted Anurati.

Devoted Anurati by himself is a rather easy fight, with his abilities being limited to Strike, Crippling Wave, and Staggering Shock (close-range AoE that inflicts stun). The main difficulty however comes from the adds he will frequently summon to the fight. With about every Staggering Shock two groups of 2-3 Dragonbound devotees will spawn at the entrance of the Great Chapel and run towards the boss, at which point they will join the fight. It is recommended for the DPS classes to intercept them at the top of the stairs and burn them down as quickly as possible, once again treating Udas Darkwatcher with priority. After dispatching the healers and ranged attackers the remaining (melee) mobs could be kited, allowing the DPS classes to return their focus to the boss. Outlive the waves and put an end to Anurati's preaching once and for all.