Taloc's Hollow is a solo instance for players of level 51 and above. Introduced with the 2.0 update, its entrances are located in Taloc's Forest in Inggison and Krug Basin in Gelkmaros. Access to the instance is automatically unlocked when the player reaches the relevant campaign quest, after which it may be entered freely.

In this instance the player ventures into the interior of Taloc, the first and largest Elim in existence, in order to clear out the various parasites and creatures that have been infesting and draining the tree of its energy, which in turn threatens both regions as Taloc is responsible for the generation of Aether there. The instance is relatively straightforward, and with some careful pulls to avoid being overwhelmed by mobs is easily manageable.

''When the Cataclysm shattered the Tower of Eternity, thousands of fragments from the great structure rained down all over Atreia. One huge shard tore into the ground beneath a great tree, long believed to be holy by nearby villagers. Soon the tree’s roots fused with the fragment, and the tree gained sentience; it became an Elim.

This Elim, Taloc, grew with each passing day, stretching its roots into Atreia's very bones, and its branches into the turbulent skies overhead. Eventually Taloc grew so large that the Hallows inside it became veritable caverns, and the creatures that took up residence inside the Elim mutated.

Daevas were later sent to explore Taloc's Hollow by his protectors, as they heard how their elder Taloc felt the an unceasing pain in his depths. As Daevas ventured in, most of them came back days later with a mysterious illness. Shown to be some kind of poisoning, it is eventually discovered that the Aether inside is abundant and pure enough to overdose anyone who dares to enter.

As the player is called over to investigate the situation, he proves to be strong enough to withstand the deadly side-effects. Aided by a fruit bore by Taloc, the Daeva was buffed into a much stronger form; an Elim Protector, granting him a great strength overcome the menaces inside the roots''. 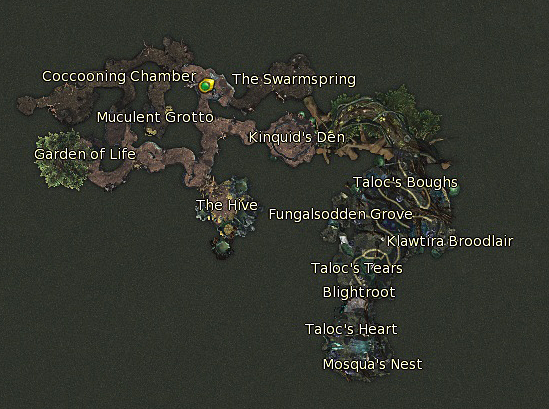 There are several items that are useful while within the instance. The first two are automatically given upon entry, while the others are found on the journey through the instance.

Upon entering the instance, Taloc Fruit and Taloc's Tears will be placed in the player's Special Cube. The Fruit must be used before proceeding: it will increase the player's maximum HP by 90,000 and MP by 40,000. Meanwhile, the Tears will prove to be useful when dealing with packs of monsters.

The player will start at Taloc's Roots next to Taloc's Soul, an NPC offering quests. While advancing into the first room, the player is reminded to make use of the Fruit. This room contains several normal graded insects, and serves a warm-up. Make your way up to the ramp in the back, defeating mobs along the way. 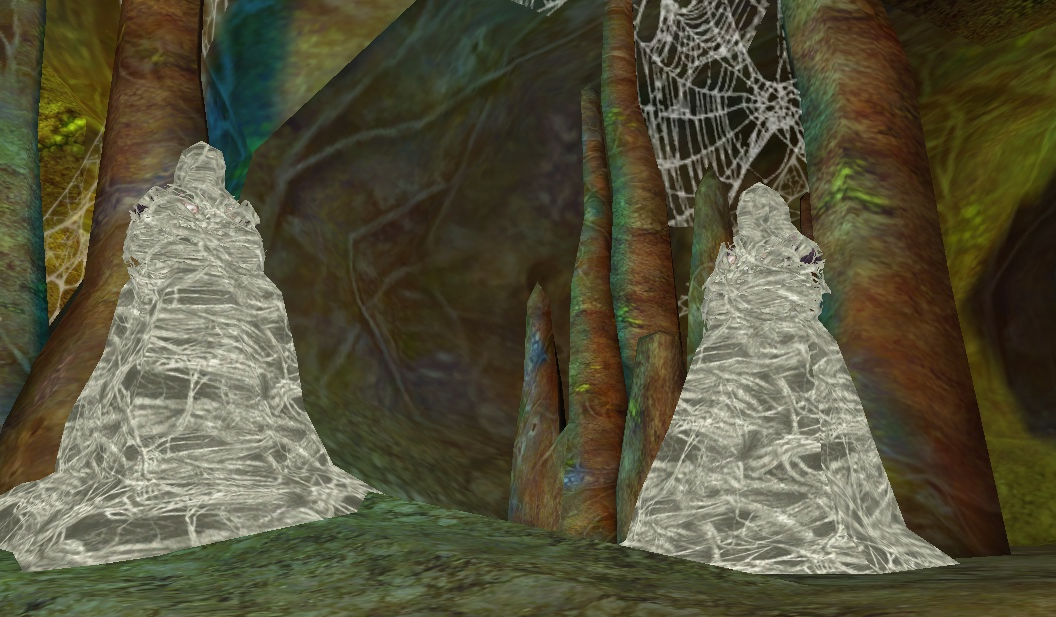 The player will now reach the Cocooning Chamber, where they will encounter the first named monster: Shishir. Being relatively easy to defeat, her only notable attack is Toxic Talon which prevents HP recovery for 10 seconds. After taking her down, the player may loot the body for Shishir's Powerstone and a Shishir's Corrosive Fluid. The player may then free either one of the two Reians trapped inside cocoons in the back of the room. Doing so will grant the player an ally (similar to a Spiritmaster's spirit), the one in the left being a Templar, and the one on the right being a Cleric. They will stick around until they die or when the player defeats Queen Mosqua later on in the instance.

After defeating Shishir proceed along the main path. Soon the player will reach a large, open room containing a Healing Plant and another ramp in the back. At the top of the ramp the player will find the second named monster, Gellmar, and a group of clodworms. Using Taloc's Tears will easily dispose of the ones surrounding him. As for Gellmar, his only skill is Drain Moisture, a strong single target attack. After defeating him the player may loot the body for Gellmar's Wardstone. Exit the room and proceed down the pathway leading to Kinquid's Den. 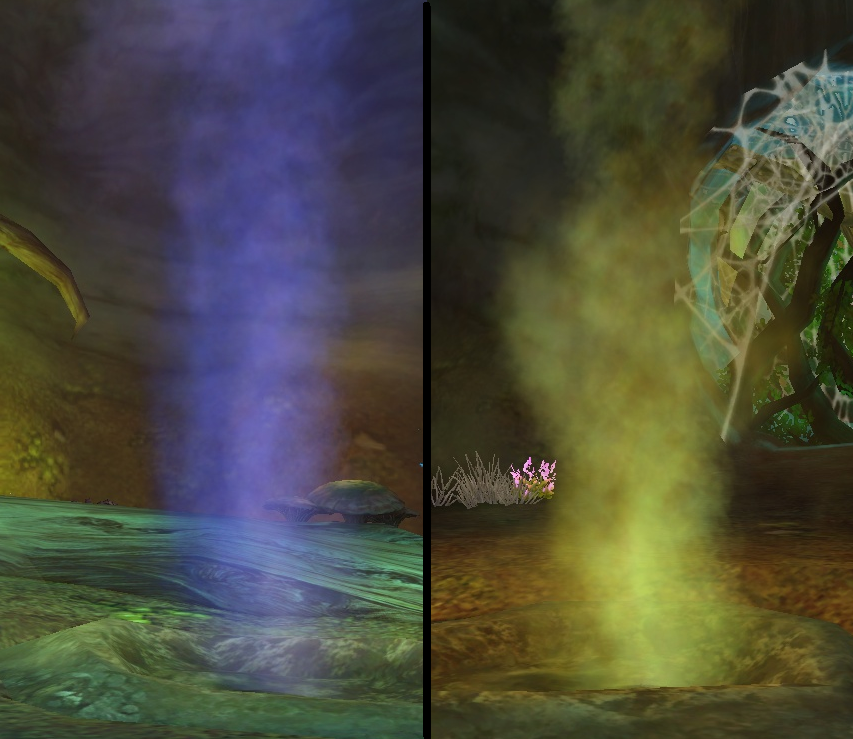 Upon entering Kinquid's Den a cutscene will trigger, showing Taloc's Soul explaining how to counter his skills. Clearing the nearby mobs before engaging Kinquid reduces the possibility of fighting additional monsters. Kinquid is the first mini-boss of the instance and may thus present a slight bigger challenge. For the first 50% of the fight, he will stick to using Kinquid's Thrust (will cause a target to bleed) Kinquid's Bite (a single target attack). However, once he falls below 50% HP he will begin using Physical Barrier (greatly buffing his physical defense), Magical Barrier (greatly buffing his magical defense) and Kinquid's Blast (knocking nearby targets down). The barrier buffs can be neutralized by luring Kinquid over the appropriate crater. When a crater releases the Yellow Smoke, it will remove his Physical Barrier, while the Purple Smoke will remove his Magical Barrier. He may additionally cast Thornbush Armor, a buff which will boost his offensive and defensive attributes.

After Kinquid's defeat the journey continues into Taloc's Boughs. This seemingly ever-turning and twisting path will be infested with small monsters. Celestius' tentacles may sometimes block some parts, which can be resolved by simply waiting for him to retreat them after some seconds. Some care is required as some mobs on upper sections may notice the player and jump on him and drag additional mobs towards him. This place will additionally feature Komad Diviners, Komad warriors who may summon clones if ignored for too long.

Atop of the path the player will find himself in Taloc's Tears, where the third and final named parasite awaits: Neith. Defeating it will grant the player Neith's Sleepstone. The player will also meet a Shulack refugee here, Dorkin. Make sure to interact with him before moving on to advance the campaign quest.

Pressing forward, the player will finally reach Mosqua's Nest, where the second mini-boss will be confronted: Queen Mosqua. This winged Klaw has a variety of skills in her set. If the small supraklaws present in her nest are not disposed of, she might call for their assistance during the battle. Throughout the fight, she uses several attacks, such as Queen's Kiss (knocking down nearby enemies), as well as Spawn Eggs (summoning several eggs around her). If the eggs are not dealt with, they will eventually hatch into additional monsters. Nearing 50%, she will use Queen's Welcoming which will summon a clone of herself. She can, however, be taken down fairly easy. Nearing the end, she will add Queen's Pride to the mix, a buff boosting her offensive and defensive attributes.

After her defeat, the player may then shatter the Cracked Huge Insect Egg in the middle of the room, which will then release an air current heading upwards. Gliding on this air draft will allow the player to reach Taloc's Heart, the inner-most chamber.

Abundant in Komads, players may opt to slay few groups of them in order to reach Celestius, or simply run past and jump down the cliff to the boss' location as they will not follow them there. If the player opts to slay some Komads they may smash open the Concentrated Sap, which will damage and poison the Komads standing near it.

In the Blightroot players will face Celestius, the final boss of the instance. This fight is rather straightforward with no major danger, but with a big skillset. Throughout the fight, he will use Celestius' Whip (single target attack) and Spore Shower (poisoning enemies). After 75% of HP, he will begin using Drain Moisture (single target attack), Grasping Tendrils (knocking a target down) and Celestius' Thorn (bleed effect on enemies). After 25%, he will use Celestius' Net (pulling targets onto him).

After Celestius defeat, Taloc's Mirage will appear and thanking the player for putting an end to the corruption inside the ancient Elim. After turning in the quest the player can then leave the instance by talking to the Mirage.