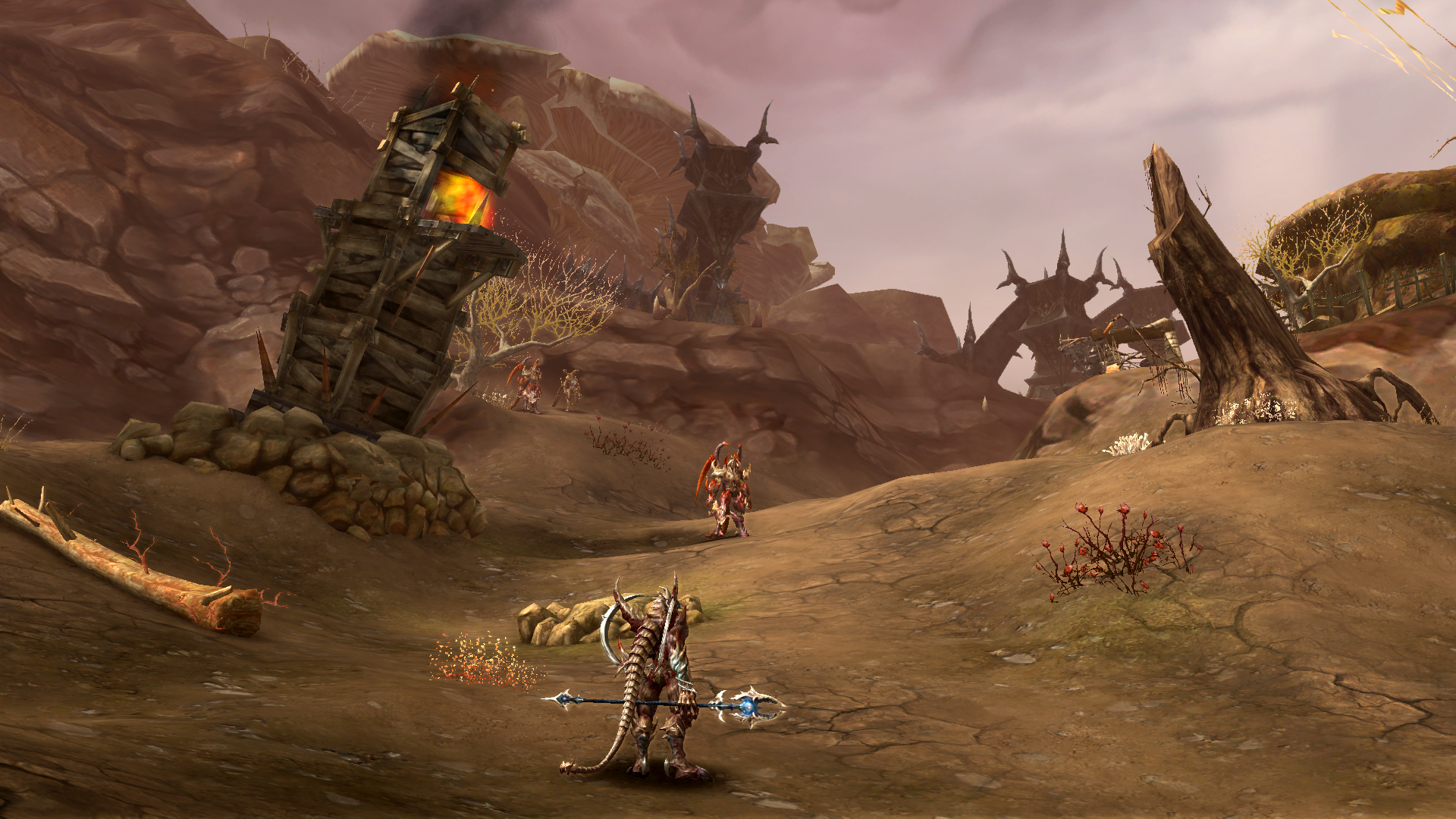 Dark Poeta is a group instance for players of level 48 and above. It is an alternative future version of Poeta in which the Balaur managed to infiltrate and overrun the region, leaving a trail of death and destruction in their wake. Access points were located in the Kishar Observation Post (Heiron) and Hoarfrost Shelter (Beluslan).

It was the first timed instance players would encounter in their journey, as well as the first instance to employ a ranking system. The type of final boss encountered (and thus loot) was determined based on the team's score, as well as the amount of time left upon reaching the final area.

While difficult and lengthy, the instance awarded very good Fabled-grade gear (including accessories) , a chance at an Eternal-grade weapon (S-rank boss) and a wide variety of Balic crafting materials.

''When the Abyss was discovered, the first in thousands of cutthroat battles were fought over the Abyss Gates leading to inner Atreia. In time, the Elyos secured or destroyed all Abyss Gates leading to their lands, until just one remained: Poeta. Following a bloody conflict that saw several immortals banished or stripped of their soul, a handful of courageous Daevas, with the assistance of the Seraphim Lords, collapsed the Abyss Gate leading to Poeta. The Balaur shrieked in anger, hurling the sum of their rage at the now decrepit portal. But to no avail, the way was shut.

Time passed, and life in Poeta went on, its citizens seldom aware that their land had ever been in danger. But on the other side, the Balaur schemed, and when enough failures, and bodies, had piled up, the Abyss Gate reopened. The Balaur cackled, drinking in their magnificence with forked tongues. The Dragon Lords tasked Brigade General Anuhart and his Anuhart Legion with razing Poeta. Anuhart himself was the first through the Abyss Gate, but no sooner had he set foot in Poeta, than he realized something was amiss. Timolia Mine was in shambles. The Krall, who had a base of operations there, had been driven back and defeated…decades prior it seemed; this was not the Poeta of the present. In their frenzied pursuit to reopen the route to Poeta, the Balaur had made a critical miscalculation. This Abyss Gate led to a future Poeta…but was this a bane, or a blessing in disguise?

Anuhart needed no affirmations from the Dragon Lords; the Balaur spilled from the Abyss Gate, a contagion of disfigurement and disease following in their wake. Akarios burned; its citizens crying out for heroes that would never come. Daminu Forest withered, and the Elim became horrid shades filled with ire. Those creatures that survived the pestilence were malformed by the Balaur, subjected to horrific experiments or driven to madness by desperation. The sylvan land blistered and cracked as the draconic war machine rolled over, dragging a funeral shroud behind it. Darkness consumed Poeta, and when the carnage ended, the Balaur had created a foothold on the interior of Atreia. The future lost, hope now turns to the present, for it is but a matter of time before the Balaur in this Dark Poeta open more Abyss Gates. The fate of Atreia falls to brave Daevas, both Elyos and Asmodian, to drive the Balaur back through the Abyss Gate, and ensure that the Dragon Lords’ influence is not allowed to spread''.
Walkthrough

Even though it is a pre 2.0 endgame dungeon, the basic system of the dungeon consists of making 19k points or more to reach the S rank, face the last boss in its strongest version and guarantee a loot with the first eternal weapons in the game.

If you have a guide for this dungeon and want to share, send me an inbox.

It's a great place to pick up craft items, including for the Hot Heart of magic