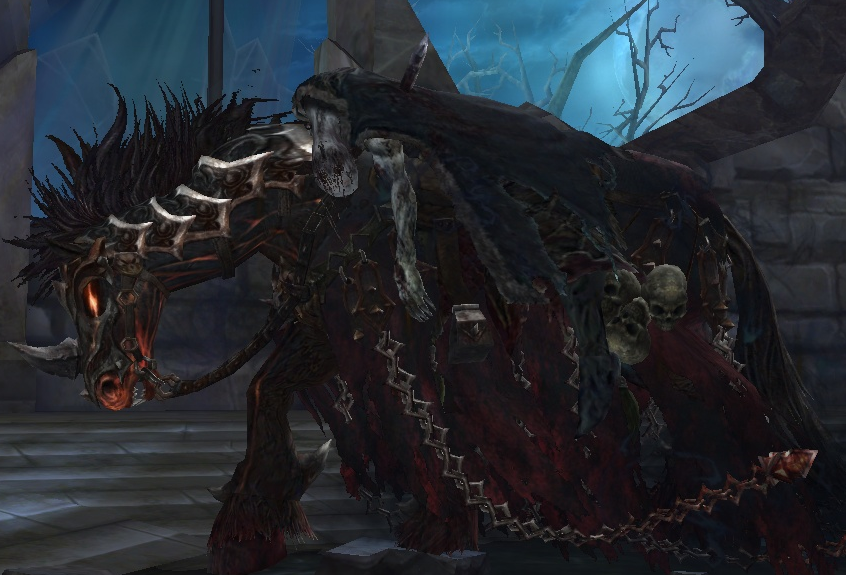 Situated in the desolate wastelands of Brusthonin the stronghold of Adma was once a mighty structure of the Asmodian people. Long since corrupted by the evil that has infested Brusthonin its steel gates remain barred, hidden behind a wall of undead peasants who attempt to enter it to this very day.

Entrance into Adma stronghold is obtained via the Brusthonin campaign chain

Upon completing this quest series you will be able to gain passage into Adma through the Stronghold itself, a seemingly impenetrable fortress stalked by Vampires and Banshees

After making your entrance into Adma you will find a main chamber directly ahead, chances are you will need to clear both sides of the room before making your way to its center. There will be a couple 3-pulls in this chamber so be sure to have CC ready, chances are your cleric doesn't really want to be zerged by Vampires.

After killing our lovely Bard Guionbark at the end of the chamber you will acquire the Library Key, now here is where content becomes optional. You may either proceed behind the baron and to the right towards the Library and make a bee-line for the exit or stay in this chamber and grab some additional content. For the purposes of this guide we'll assume your group wants to do the full run.

On that note hop back down into the main hallway, you will notice two sidepaths (one on each side) heading into the basement. If you're in a rush just hover over your minimap on both sides until you find Steward Gutorum, his spawn location varies so be sure to check both.

Once you've find the correct side pop down the path, do watch out for roving zombies which can and will spawn on your party as you head down. These monsters are not invisible they actually trigger spawn so seeing invis wont help you here.

Watch out for roving patrols and you should be fine, try to keep the pulls around 2-3 mobs or things could get hairy if your party is low-level or poorly geared. Clear as much of the room as you need until the Steward is pullable, burst him down and be sure to acquire the Inner Chamber Key.

Head back up to where the Bard was and pass through the left passageway and, gasp, hang a left. You will be encountered with a locked door, your Inner Chamber Key will open this. Be wary of poison gas in this hallway, the gas makes multiple appearances throughout the instance and while only causing slight damage it also gives movement impairments. You cannot dodge this gas except as sorcerer with blind leap (risky) nor can it be dispelled even with clerics.

You'll want to hang right through this room although the first pull will most likely be a three-pull (Two templars and a banshee) Do be vigilant for the banshee fear which can easily cause a wipe if you're group isn't prepared for it. Once you make it to the next room you'll find, surprise surprise, more Vampires!

While you can bee-line through this chamber it only takes one careless person to pull the entire room, unless your group is good at that sort of technique clearing a good side is properly the safest bet. Pretty straight-forward, simply proceed to the next chamber.

Do note that there's also a door on the left, this door is currently locked to your group.

Oh mah gawd if I had rolled a female character I'd want that dress.... moving on! Princess Karemiwen will be guarded by a small army of banshee's and temptresses. You will need to kill every single one of the mobs in this chamber before beginning the battle. Yes you can cut through and get to her directly but that's going to end in defeat.

Once you have cleared the chamber you will notice two interact-able objects, these being the Tarnished Incense Burner& Ntuamu's Teddy Bear. Make sure your group knows exactly where they're situated. Once that's done feel free to pull the boss and begin your glorious tank and spank. What's this... a debuff that cannot be dispelled?!?!@?

Fear not because this is where those two objects come in, the Princess has two major debuffs (they effect Healing/HP Loss, Mana Regen/Casting Time depending on which she does) which you cannot ignore if you intend to win. Those two objects mentioned earlier each dispell a debuff, much like the ghost fight in Steel Rake. Your entire party will need to run to the correct object, only one person has to use it but if you are not within the immediate range you wont be cured.

Tarnished Incense Burner - Mental Tremor (blue)
Ntuamu's Teddy Bear - Deep Wound (red)
Upon clearing your debuff drag her back to the center of the room until she does another, the casting order is random. If you're lucky she may even drop that dress she's wearing, female characters only mind you! The princess will also drop the Main Hall Key.

Time to head back and go through that locked door mentioned earlier, you will travel down a short hallway only to find yourself in a circular chamber packed with mobs. In the center of this room lies the next key guardian, Templar Taliesin.

Once you've cleared enough monsters to pull him you will notice he has drops yet another key, now this is where things get tricky. The Templar may drop one of three keys, he'll usually either drop the Treasury Key or Servants Quarters Key however this is a chance for the Great Dining Hall Key also. This guide will detail the most... painful of rooms, that being the Main Dining Room.

The Main Dining Room - A thousand trainpulls await you.

Upon clearing the outer guards you will probably notice your minimap is a sea of red, your group will very carefully need to jump down to the left rather than go down the stairs or attempt to pull monsters out of the room. You will land in a three-pack of monsters which is by far the easiest route.

After clearing these rooms you should be able to avoid the two banshees on the wall by jumping over the table, hang to the left side until you get to Butler Luitart. Burst that lovely chap down and steal his Observation Post Passage Key, this will allow you into the sewers (The door to which is on the other side of the circular room)

Head back out and across the hallway until get to the sewer entrance, now is a good time for a breather should your group need one. Things become fast paced after this! Once that's done prepare to head downwards...

My oh my, hello there you dashing sorcerer you.

Backshots of my character aside be sure to have your tank head down first, when you land two waves of zombies will spawn and attempt to ambush your group. They're pretty squishy so AoEing them down should be fine. You'll want to hang a right out of this chamber and proceed towards the end...

Now at this point you have two choices, fight your way through or charge to the end and take a few deaths at the doorway to the final boss. After which your healer(s) can self res and bring the group up. You'll loose a bit of XP but in-exchange gain 10+ minutes of time. Considering my group was 50's we skipped this part by charging through with our templar leading the way, you basically follow the path until you get into a large square chamber with the slime in the middle. At this point you can hang a hard right and run through a hole in the wall up to the next floor. Hanging right again and heading even further up will bring you to a room with a slowing gas chamber and two paths, at this point you would head left and up to Lord Lannok.