Steel Rake is a group instance for Level 40+, although commonly level 44 or higher. The entrance is in either Pandaemonium's Airship Dock, or Sanctum's Outer Dock. The instance accesses the Lower and Upper Decks of the Steel Rake. To enter the instance, Asmodians talk to Raninerk, Elyos to Hikarunerk.


In order to access the Steel Rake instances, players must complete quests.

A Suspicious Call . After doing so, go to Pandaemonium's Airship Dock.
Elyos - Complete

The Price of Goodwill . After doing so, go to Sanctum's Outer Dock. 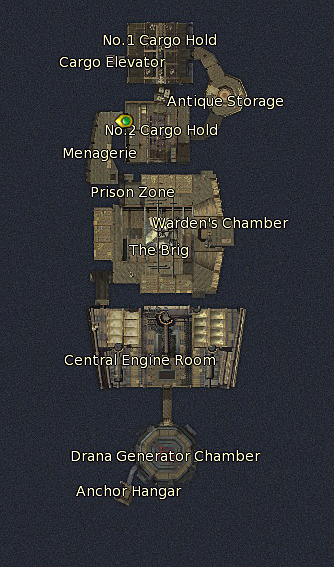 
Entering the instance, the first area is No.1 Cargo Hold, which has several patrols which can aggro additional mobs if not pulled in the middle of the room. Work straight across to the door on the far side which leads to the Antique Storage. The Freed Genie, which has a chance to spawn in the Antique Storage, can poison the entire group. Pull the Genie from the room, and decrease the effect of the poison by having one person click the Genie's Incense Burner. You can skip it entirely by skirting to one side.

The next room is the No.2 Cargo Hold, which is relatively straight forward through the center of the room. Kill Sturdy Bubukin to get the Menagerie Key to go to the next room. When entering the Menagerie room, there are two mobs in Hide at the door. The animals here are all normal mobs, and easy to kill. Continue through the room to the Prison Zone.

Special Delivery can be one of six different spawns. Talking Qooqoo Koggio is level 1 - no loot. Level 44 can be Competition Winning Kurin (no loot) or Trainee Shoryuken or Trainee Hadoken who drop Fabled crafting materials. Level 45 RM-138cx or Monster Grengamam can both drop Heroic or Fabled loot.

To the east of Alakin is the Warden's Chamber, where Warden Tantanka holds the key to the next area - the Central Engine Room. Tantaka is another "tank and spank". Work through the room, watching for Shulacks in Hide mode, to the far side to kill Technician Binukin to get the Power Chamber Key to the last room on Lower.

The Drana Generator Chamber contains Engineer Lahulahu. The room contains Steam Nozzles, which emit an AoE damage when activated by Lahulahu. Wedging in one of the two corners near the valve pillars will decrease the damage. Melee using distance weapons is also helpful. Lahulahu runs back and forth to activate the nozzles. Defeating Lahulahu will drop the key to the Anchor Hangar which leads to Upper Steel Rake. If exiting now, there is also a Hidden Escape Hatch in the Drana Generation Chamber get off the ship.


Using the Pirate Ship Anchor will teleport to the upper level of Steel Rake. Destroy the Air Vent Cover and move onto the Central Deck. Find Largimark the Smoker who spawns in either the southeast corner or northwest corner of the deck. There are several Shulacks in Hide mode on the deck, as well as patrols, so proceed cautiously. Get Largimark's Flin, and fire the Central Deck Mobile Cannon on the eastern side of the deck to kill the large group of mobs near the stairs. Firing the cannon causes Chief Mate Menekiki to spawn, who has a large aggro. Pull him back to a cleared area. He drops the Weapon Storehouse Key.

Head back towards the Air Vent entrance to the level, and open the door to the left. Proceed carefully, as two hidden Shulacks wait at the bottom of the stairs. Kill them, go through the center and down a ramp. At the bottom is Zerkin the One-eyed who is a "tank and spank" and drops the Large Gun Deck Key.

There are two Hidden Shulacks immediately inside the door to the Large Gun Deck. Clear the room. Chief Gunner Koakoa is relatively simple, if the group is smart. Throughout the fight, he will spawn bombs - a Colossal Bomb and a Teeny Bomb. Group up on a Teeny Bomb, destroy it, and remain on the spot until all the other bombs explode. Colossal Bombs will do massive damage. Throughout the fight, Koakoa does AoE damage, so ranged players are best near the door, running in to the Teeny Bomb when it spawns. There is no area of the room that is not affected by the bombs. Loot the Gun Repair Deck Key, and go back out the door. Head east, and clear the couple of mobs to the Gun Repair Deck ramp.

Go up the ramp and immediately click on the Suspicious Cannon. Enjoy the ride to the uppermost area of the ship. Once the group has all arrived, head to the east to the Steering House, killing the two hidden Shulacks at the door. Finally, inside the Steering House is Brass-Eye Grogget.

Killing Brass-Eye Grogget requires good DPS and immediately killing the adds that periodically spawn during the fight. The tank should pull Grogget to the room center. He will use Stigma Amplifier, which will require extra heals from the cleric. A second skill, Dauntless Spirit, gives Grogget a physical damage reducing buff, which can be dispelled by a Spiritmaster. Periodically Grogget will become invulnerable with the Captain's Pride buff, and retreat back to the top of the stairs. He summons servants, who will need to be killed as quickly as possible. There are usually two waves of monsters for the first three times they are summoned, and three after that. At 50% Grogget uses Curse of Old Roots to turn players into trees. At 25%, he pulls players to the center and uses a massive AoE skill. Players need to get out of range. The Captain's Treasure Box requires a key and can only be opened by one player. The Shining Box reappears, and contains a quest item.