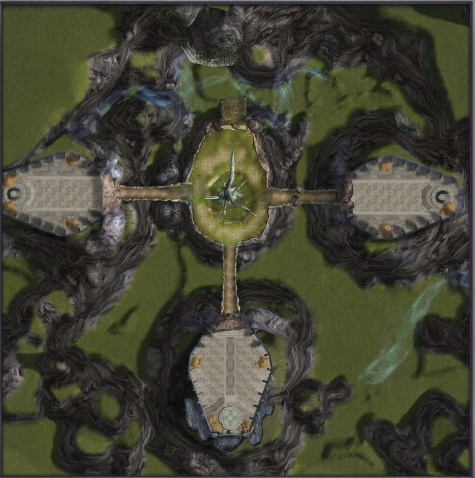 Asteria Chamber is a fortress group instance for players of level 40 and above.

''As the Balaur dominated the fortress, they found a portal in the inner chambers, leading to a small canyon somewhere in Lake Asteria. This beautiful scene was soon adapted to hold the Balaur's previous treasures. To ease up access, the portal was reshaped as a painting, reflecting the beauty of that sanctum and all the spoils it contains. However, as other factions gained control of the stronghold, they soon found out this hidden area, as well as its guards, hoarding several riches''.

The small area is composed of a central circular platform, connected through three bridges to three narrow treasure room. As soon as players cross the Protective Ward, a 15 minute countdown will begin, indicating when the treasure chests will disappear. Each room holds only one Treasure Box, which can only be opened if a player is in possession of the appropriate key, held by the room's unique mob.

Each room is heavily guarded. Nonetheless, players should avoid attacking the room's boss, as it will instantly cause all mobs in the room to aggro on the attacker, making it imperative to clear it out before engaging the boss. Each boss has a different difficulty, turning harder from left to right to the middle.

The main treasure room, on the back, will be guarded by Ebonlord Kiriel. His skillset include pulling targets to him, several magical attacks, but most notably, a shield which reduces physical damaged inflicted on him which he will keep throughout the fight, making a magic damage dealer more ideal for this encounter.