Draupnir Cave is a group instance for level 39+ players. This vast cavern system was the headquarters of the Bakarma Legion invading Beluslan, a hostile region swarming with seasoned Balaur warriors and their servants. The entrance was located in the Bakarma Barracks in Beluslan (Asmodians) and Dragon's Blood Canyon in Heiron (Elyos).

While players may enter the instance at level 39, most groups opted to take higher levels since the enemies inside are extremely resilient and are of levels tending to 50. Due to the instance's length, complex layout and layered structure, as well as its numerous strong elite monsters and bosses, many players perceived it to be the first "real" challenge in the game. Rewards included Fabled-grade gear, a wide assortment of Balic crafting materials, and advancement in the original Asmodian campaign quest.

''No Balaur had set foot, much less establish themselves, in Beluslan after the Cataclysm. Their loyal servants, the Hoarfroast Mau, eventually managed to open an Abyss Gate, allowing the invaders to advance into Asmodae. Unfortunately for the Mau, the Balic leaders had much darker intentions; they betrayed them, annihilating almost their whole tribe and occupying the land which used to be their village.

The major threat for the Balaur was the Aether which flooded the region. In response, they installed machines able to absorb and completely suppress it, creating the perfect environment for them to set up their headquarters. In the process, they also managed to take down the Beluslan Aetheric Field Observatory, disabling the Aetheric Field protecting the region, exposing it to other big-scale menaces.

This massive breach in security led to Daevas investigating on how to counter it. As they learnt about their devices, they gained knowledge of their mighty brigade general; Commander Bakarma. This gigantic Drakan would be known for the power it wielded, rumors which were confirmed while battling him''.

This instance comes with several bosses. The main boss, Commander Bakarma, will only spawn in Beritra's Oracle once Instructor Afrane, Commander Nimbarka, Beautiful Lakshmi and Kind Saraswati have been disposed of. Due to the several paths, this instance can be run in different ways. However, most groups will stick to only one route. 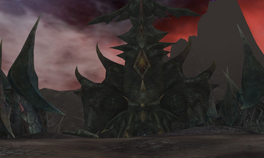 The group will start in Draupnir Cave Entrance. Players doing

Suppressing the Bakarma Legion may talk to Fafner and be teleported to the Lair of the Drake to complete the rest of their quest. Do take notice that the teleportation option may only be done once. Groups going for a full run will progress further by foot. On the following chamber, players may sometimes find an optional named mob; Protector Rakkan. He does not pose a major threat or special loot, therefore ignored by most.

Following the path, it will branch into two ways. The way to the right will lead to the Chirurgeon's Room, which holds a single named mob, Lazy Dragashum, which is usually ignored as well. However, if a group does decide to fight this boss, they should clear the whole room. If they do not the whole room will be pulled, as the draconute will casts Wake up! You lazybones! once aggroed. Meanwhile, the way to the left will lead to the Primus Monstrare inhabited by some patrols which might trouble the group if not taken care of. Patrolling around, players might also sometimes find Dragonpriest Tairgus, another optional named mob ignored by most. The group will notice the path branches once again into two others.

The way to the right will lead to a hallway with a hole on a wall. Following the main way, the party will meet in the Secundus Monstrare (also sometimes holding an optional named mob; Shadowmaster Takrin, which will then lead to the Glissade Corridor. This forgotten chamber, overran by monitors and slimes presents moving platforms. If a group member fails to jump over them and falls down, they may head down to a path and end up in the aforementioned hole in the wall, allowing them a second chance to go through the platforms. After having passed them, the group may access the Central Control Room. This platform, heavily guarded by patrols, holds the Balaur Bioweapons required for their appropriate quest and a named mob, Greatscholar Jaadis. This room is connected, in the opposite side, to the Net Passage.


Back to the Primus Monstrare, most groups will instead opt to take the way to the left, leading them to Bakarma Monstrare. As soon as the step in, players needing the Bloodfury Booster for the quest may interact with it and spawn its protector, Supervisor Nyvedija. Due to the center of the monstrare being heavily attended by several guards, the group will have to stick to the right wall and avoid aggroing any mob in order to reach Instructor Afrane. Being the first boss required to summon Bakarma, his only key skill includes temporarily paralyzing targets around him. Once disposed of, players may jump down the ravine behind him and glide down onto Nimbarka's Study.

Groups tend to only defeat the mobs on the right wall to reach Commander Nimbarka. Like the previous boss, he does not possess particularly damaging skills. Its defeat will allow the players to reach the Net Passage, a set of bridges connecting the different rooms of the cave. Reaching the Crystal Chamber, players opt to once again stick to the right wall in order to reach Beautiful Lakshmi in the back end of the section. Her most notable skill is Nightmare, putting a reflective shield on her as well as summoning a guard to aid her. She may additionally put the Freeze Leg debuff on an enemy, which will inflict a damage over time. Within the same chamber there is also a small treasure room, which may hold the Lucky Golden Saam, a named mob which offers Fabled gear and a souvenir. During the fight it will use Mental Stability (binds and silence a single target), Increase Stamina (transforms into a Skurv and puts them into a fear state) and Meridian Massage (a strong attack). The biggest menace might be the fact that the treasure room is heavily guarded by hidden mobs which will be aggroed when the Saam is hit.

Back to the Net Passage, the group will continue into the Unstable Drakie Experiment Area. Heavily inhabited by Drakies, players might have to take turns to cross without aggroing all the specimens at once. After having avoided or killing the Drakies on the way, Kind Saraswati will appear before them. While not possessing particular skills, the fight might lengthen more than the expected as this boss may sometimes heal herself back by a 25% of HP.

Both ways from Primus Monstrare meet at this point in the Net Passage. The corridor connecting this portion and the Central Control Room has a small hidden passage on the western wall, leading to the Sanitation Facilities. Inside this discreet room, the party will find Daevas stuck to the walls. Following it to the end, a room abundant with decomposition and anubite, a lone human, Ripley, will be found, offering a quest for Asmodians.

The Net Passage will finally link with the Lair of the Drake. If no one in group requires blowing up the Balaur Aether-consuming Stones for the campaign, this area can be skipped, and players may proceed right into the Red Fang Cave. At the end of this tunnel, a moving platform will enable the party to reach the deepest section of the cave and where the final fight with Bakarma will happen; Beritra's Oracle.

This extensive circular platform by default only holds Deputy Brigade General Yavant, controlling the Aetheric Field Suppressing Device. In the annex platform people may also find the Artifact of Sealing required for the [Group] The Curse of Agrif's Rage quest. If the group defeated the previous bosses, Commander Bakarma will be awaiting, patrolling in circles. Before engaging him make sure all group members have a number of Greater Healing Potion (or similar equivalent) in their possession.


Commander Bakarma might present the greatest difficulty in the whole instance, mostly because of his vast arsenal. As the fight starts, he will only use Stun Strike, which will stun enemies within a range of 20 meters. This skill will be present throughout the encounter. Nearing 75% of HP, Bakarma will summon the first wave of additional monsters. This wave is composed of three Draconute Legionaries. The leader should be marking each add, following an order, as all adds are quite resilient, and therefore they should be focused by the rest of the party. From there until the end, Bakarma will also frequently use Battle Cry (boosting his own attack attributes and knocking one target down), Assault (stunning several targets around him) and Powerful Knockdown (knocking down a target).

As the group survives his strong attacks, at nearing 50%, the second wave of adds will begin, formed with three Nagrant Legionaries. Like the previous wave, they should be marked. Some groups struggle taking out these mobs on time since they are even more powerful than the previous ones. Flame Shower of Wrath will begin being used at around 20%, giving a debuff to nearby enemies. In rare occasions, a third wave, composed of Drakes, might also spawn. While not as resilient as the other waves, added to Bakarma's skills, it might wreak havoc to the group. Finally, nearing the end, he may instantly turn all enemies around him into Qooqoos, preventing them from using any skills. All group members should immediately use a Greater Healing Potion(or similar equivalent) at this point, as he will not cease attacking his vulnerable targets. Provided the group has survived this fight, they may loot his corpse for a variety of spoils.