Azoturan Fortress was a group instance for players of level 35 and above. This fortress, located on an island somewhere in Reshanta, was the main headquarters for the Heiron branch of the Lepharist Revolutionaries, led by Icaronix. It could be accessed through an Abyss Gate located within the Lepharist Research Center in Heiron.

The player Elyos would travel to this instance as part of their legacy quest.

''After uncovering the series of lies set up by Icaronix, the Elyos player tracks him down and gives chase in order to have a final showdown with him, avenging all fallen comrades. After venturing inside, the former Brigade General meets up with several Shadow Elder spies vigilating the stronghold, but they are quickly spotted by Icaronix. Giving the player one last chance to flee, he heads to his main room in the deepest part of the fortress.

Wishing to take the challenge, the player fights his way through numerous Lepharists and their twisted creations until he reaches the main chamber, where an intense battle with the betrayer begins. As the player puts an end to his life, the present Shadow Elders tell the player they will clear out the rest of the fortress while looking for any remnants. With Icaronix' demise the player has avenged his past comrades and put a stop to the Lepharist's activities in Elysea, filling the minds of all those affected with relief''. 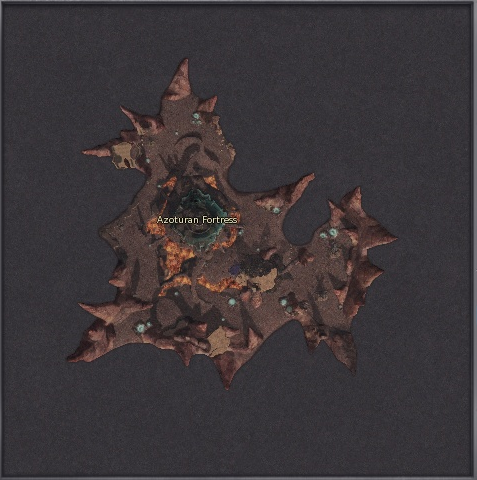 Players will start on the edge of the floating island, in front of the exit, where they will find Acestes. This NPC offers the quests related to instance.

If the group is doing the

Fragment of Memory 3 campaign, they will be talking to him and sent to a hovering shard above the fortress, where they will meet the second Shadow Elders spy, Peitho. After talking to her, a small cutscene will play, leading to the player being transported to the upper platform of the fortress.

If the group does not have the campaign, they will have to make their way to the inside by walking. By taking the swirling bridges, the group will reach the Fortress Gate, which will have to be taken down manually. Once down, players may proceed to the Azoturan Fortress Interior, heavily guarded.

The group must reach the middle and descend the stairs, entering the Azoturan Fortress Sublevel. Following the narrow corridors, the party may enter to the Artifact Room and take down the first optional boss, Lab Director Elizer, for a chance at special loot.

Venturing deeper inside the stronghold, the group will reach the main chamber, holding numerous guards. Right below the stairs the second optional boss can be found, RM-56c, and, on the opposite side, where the Guardian General of a Fortress would normally be, the final and most important boss awaits: Icaronix himself.

It is important that the party clears most of the room before pulling Icaronix, as aggroing him will cause most of guards to rush to his aid. At first, he will fight as Betrayer Icaronix, his human form. However, as the fight wears on, he will replenish his HP and transform into Icaronix the Betrayer. This second form shares the appearance with the artificial beings created by Lepharists. The fight does not present any particular difficulties, although the boss does have hard-hitting attacks. test