Aetherogenetics Lab is a six players group instance for Elyos of level 35 and above. This hidden facility is a Lepharist research center, where members of the group are conducting horrendous experiments on live test subjects to reveal the mysteries surrounding Ascension. It can be accessed from the Lepharist Research Center in Heiron, and is part of the campaign quest line.

''As the Elyos in Heiron were investigating the reason why so many Elim in the region had turned into Agrints and Rotrons, they at last discovered that cause of the contamination was the same poison that was discovered in Verteron: Meslamtaeda's Blood. The investigation soon focused on the Lepharist Revolutionaries operating in the area, and when the Elyos manage to secure a runaway Lepharist scientist they soon after learn about the existence of this hidden lab in the area.

Venturing inside, the Lepharist's master plot was revealed. The lab was dedicated to perform experiments on wildlife, in order to improve their abilities. However, they played the role of simple peons in their research. The knowledge the Lepharists acquired was employed to create a process to artificially force humans to ascend as Daevas.

Scared by the procedures conducted inside, Daevas investigated more. Their fears were confirmed when they discovered the existence of a grotesque creature in the deepest parts of the research centre. In response to this, they urgently dispatched soldiers to dispose of it''. 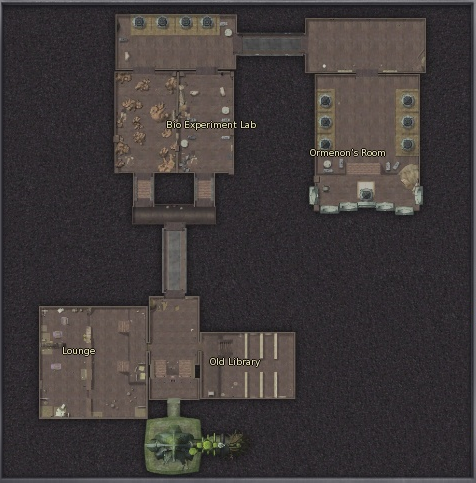 Once players enter the instance they will be in the main hallway, with a locked door blocking the way. They will have to head towards the Lounge, composed by two side-rooms. On the right side, players will be at the kitchen, where the optional boss Head Chef Pamsey is located. On the left side, players will meet the first named mob needed to progress through the instance, The Keykeeper, who holds the Lepharist Research Center Key 1.

This key will open the gate back in the hallway that leads to the Old Library. This room has several mobs patrolling the areas between the bookcases, with the Expert Lab Scholar being between two of them on the left side. Once disposed of, players may loot her body for the Lepharist Research Center Key 2, allowing them to head further inside the lab.

Both doors open up into the same room, containing several Lepharist researchers and flasks. Each flask contains human test subjects. In one of them a special named mob can be found; RM-108c, required for a quest. To the right, a small passage leads to the final locked door of the instance, which can be opened by using the Lepharist Research Center Key 5, looted from the Key Eater.

Once players have accessed Ormenon's Room, players will notice a named mob in the middle of the room . Once defeated, another will be immediately spawned, and another will appear after the second is killed. It will begin with the Perfected Pretor, followed by the Perfected Mudthorn, and finally the Perfected Rotron.

Players will now be able to begin fighting the final boss of the instance; RM-78c. During the whole fight he will have the  Suspicious Pain buff on him, granting him the chance to inflict poison each time he is attacked. He possesses several Rune-based attacks, like Assassins. Around the middle of the fight, Toxic Rune will begin to be used, which will transform all enemies around him and putting them into a fear state. As soon as he is defeated, a Strange Creaturewill spawn, causing a similar effect to Toxic Rune and swiftly vanishing afterwards.