Fire Temple is a group instance for players of level 27 and above.This underground shrine is home to Kromede the Corrupt, a former Asmodian Shadow Judge who fled here after the events of Kromede's Trial. On particularly difficult days, she will show up as Vile Judge Kromede.

Ever since its release Fire Temple has served as one of Aion's most played instances: it was the first instance that dropped Fabled class weapons. 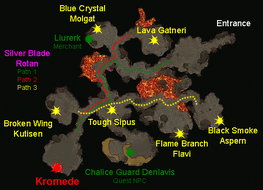 The instance features many different pathways and rooms, but most players just stick to the 'main' route (the green dotted line in the screenshot)which will take them straight to the the final boss. Upon entering proceed down the pathway, sticking to the middle to avoid aggroing any unnecessary mobs. Go down the ramp at the end but wait before turning down the left corridor: Silver Blade Rotanwill soon appear, and will need to be slain in order to proceed. Once done turn left and make your way up, taking care to not step off the path and fall into the lava pools beneath.

The path will open into a large, spacious room filled with Mugolems and patrolling Gargoyles. It is recommended to get to the middle of the room, where the player will either find a regular Mugolem mob or Tough Sipus, and then head for the upwards path located to the right. Stay close to the wall on the left to prevent aggroing additional mobs. Atop of the path will be another Mogulem; after defeating it turn left once again. You will now head down the path into the Temple Interior.

The Temple Interior will have numerous monsters in it, but only a few Temple Caryatid or Lurker Gargoyle need to be killed to clear a path to the final boss, which will either be Kromede the Corrupt or Vile Judge Kromede. All people except for the tank should keep their distance, as she has various close-range AoE skills. Put an end to her antics and claim the loot to clear the Fire Temple.